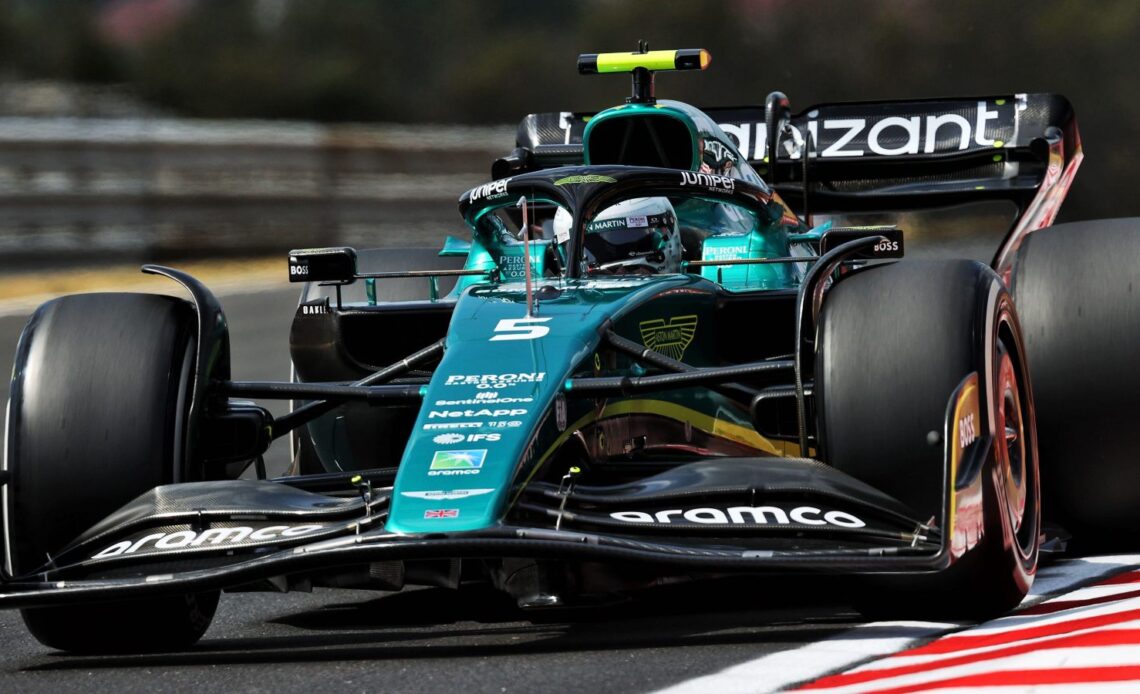 Aston Martin have unveiled a modified rear wing to their AMR22 which one F1 journalist described as “game-changing.”

Ahead of the first practice session of the Hungarian Grand Prix, a modified rear wing was seen fitted to the back of the Aston Martin car that resembled last season’s wings more closely than the 2022 iterations.

This was something noticed by Sky Sports F1’s Ted Kravitz who highlighted the bend on the end which looked designed to catch the wind more and give the car more downforce.

Kravtiz said he believed the wing could be “game-changing” for the Silverstone based team.

“Look at this rear wing end plate,” he said to the watching viewers as the camera zoomed in close on the Aston Martin car. “Now this potentially I think is game-changing.

“So remember when they changed the rules this year, they mandated that they have these curvy, like a melted Wham bar (a UK sweet) rear wings that allow loads of air to spin out over and make these cars easier to follow each other and actually race.

“Now Aston Martin have turned up here this morning with a different interpretation of the rear wing, those little armchair rear wing endplates.

“That effectively may mimic last year’s rear wing with a higher downforce, it obviously squares out the end plates. So it’s like a 2021 rear wing. I absolutely love it.

“It catches more air. It stops the spillover of air from that rear wing main plate out to be lost or not worked by the rear wing to do any kind of downforce generation that we’ve seen on every other cars. [It’s] stopped the outwash, stopped the spillover and to regain a lot of the downforce they’ve lost since last year’s rear wing.”

The unveiling of the updated rear wing has unsurprisingly turned heads of other teams in the paddock and it would not be the first time Aston Martin have been accused of bending the rules.

Before the Spanish Grand Prix, they unveiled their modified car which looked strikingly similar to Red Bull’s but, despite threats of investigation from Christian Horner and Helmut Marko, it was found by the FIA to be legal.

Kravitz reports that it is the same this time round and that Aston Martin consulted with the sport’s governing body at every stage.

“Now, is it legal?” Kravtiz asked. “Well, all the other teams of course as you can…