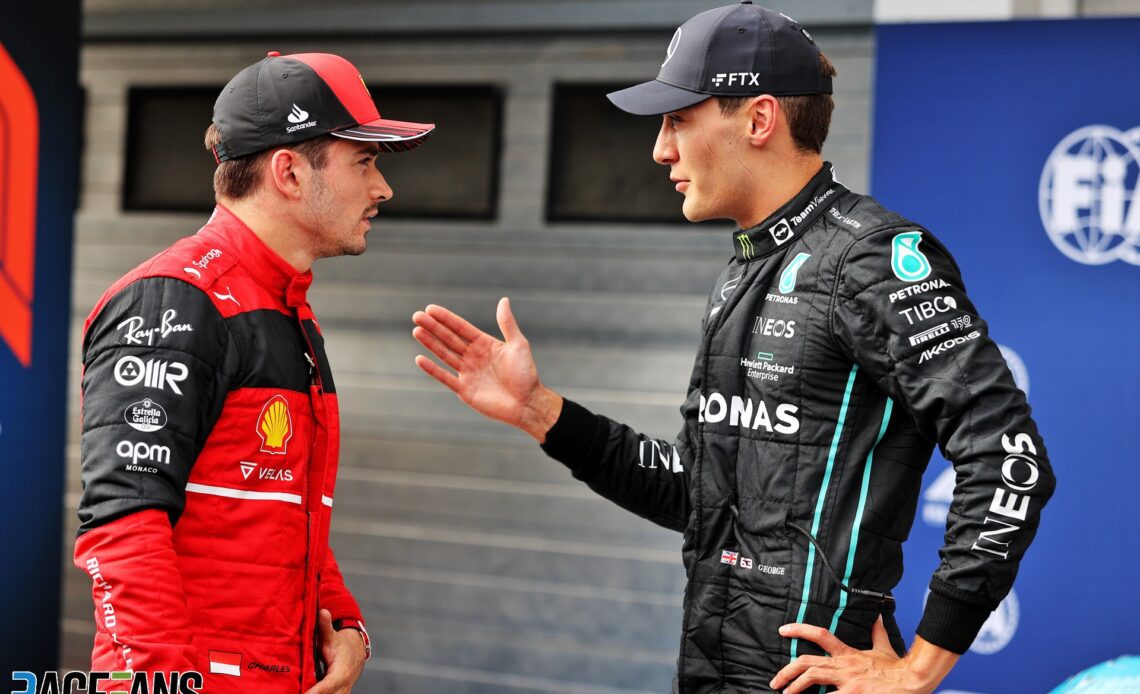 In the round-up: George Russell is rated higher than Charles Leclerc in the latest patch for the official F1 racing game.

Russell moves ahead of Leclerc in latest F1 22 driver ratings

Two months since the original driver ratings for F1 22 were revealed, the game makers have updated the values for the 20 drivers. Among the notable changes in version 1.09 George Russell is now rated higher than Charles Leclerc while Max Verstappen has become the highest-rated driver in the field outright.

Developers Codemasters have lowered Leclerc’s rating from 92 overall to 91, with a one point reduction in awareness following his crash in the French Grand Prix and a three-point drop in his pace rating.

Russell has gained two in his rating to move to 92 overall, putting him as the third highest driver in the field behind Lewis Hamilton and Max Verstappen, who is now rated as a 95 overall.

The latest F1 22 patch includes fixes to an automatic gearbox glitch that was introduced in an earlier patch and a fix to tyre temperatures being excessive cold for players who skip the formation lap. F1 22 will also officially launch crossplay functionality – permitting players to race against each others on different platforms – later this week.

Former FOM chief Bernie Ecclestone pleased not guilty at a magistrates court in Westminster to charges of fraud following an investigation by the British government tax office, the Guardian reports.

Ecclestone is charged with failing to declare a trust in Singapore worth £549m between 2013 and 2016, during which time he was still head of Formula 1 Management. He was granted unconditional bail and will appear at Southwark crown court on 19th September.

Zendeli steps in for banned Caldwell

Campos Racing have confirmed Lirim Zendeli will step into Oliver Caldwell’s seat for the Formula 2 round at Spa-Francorchamps this weekend.

Caldwell has been banned from participating in this weekend’s event after accruing 12 penalty points on his licence over the first ten rounds of the championship. He will be replaced by 22-year-old German driver Zendeli, who raced in last year’s F2 championship, before Caldwell returns the following weekend in Zandvoort.

“I’m very excited and happy to be racing a Formula 2 car again,” said Zendeli. “It’s been a year now since my last time in F2 and I’m looking forward to this experience.”