Capps, B. Force, Coughlin and Sampey all Qualify No.1 at Auto Club NHRA Finals 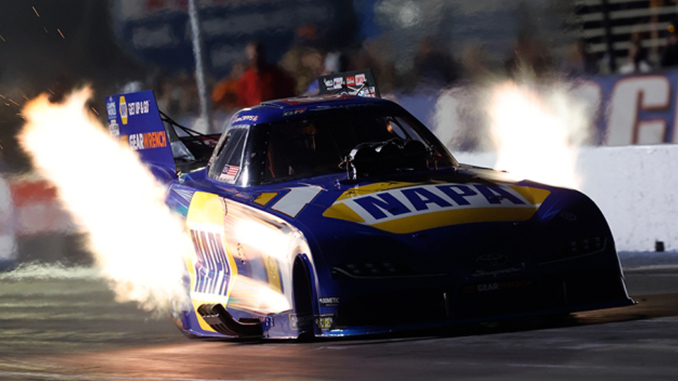 Capps went 3.837-seconds at a track-record speed of 337.33 mph in his 11,000-horsepower NAPA Auto Parts Toyota GR Supra, handing the veteran his sixth No. 1 qualifier of the season and 35th in his career. He enters raceday 57 points – or less than two rounds – behind leader Robert Hight, looking to become the first Funny Car driver to win back-to-back championships in 20 years. Capps will take on Jeff Arend in the opening round, with a possible must-see matchup looming in the semifinals against Hight, who qualified fourth with a 3.849 at 334.48.

“This is what I talk about when you get into a race car like this and you wish you could make those big runs at the big moments,” Capps said. “I know we can go out and throw down with the best. It’s a great feeling, so what a way to end qualifying. I got on the radio, and I was screaming and yelling. It was like going down the road to Disneyland and getting on Space Mountain for the first time as a kid.

“It’s a different day tomorrow. (But) I’m going to wake up my motorhome here at trackside and I’m going to have a chance of possibly winning a world championship once again.”

Top Fuel points leader Brittany Force made a pair of strong runs on Saturday, but it was her run of 3.641 at 338.94 from Friday in her 11,000-horsepower Monster Energy dragster that held up for the No. 1 spot. It gave her the top qualifier for an incredible 10th time this season and 42nd time in her career, as well as plenty of confidence going into a huge, championship-deciding day on Sunday. She’ll open eliminations against Steve Chrisman, holding a 26-point lead over…