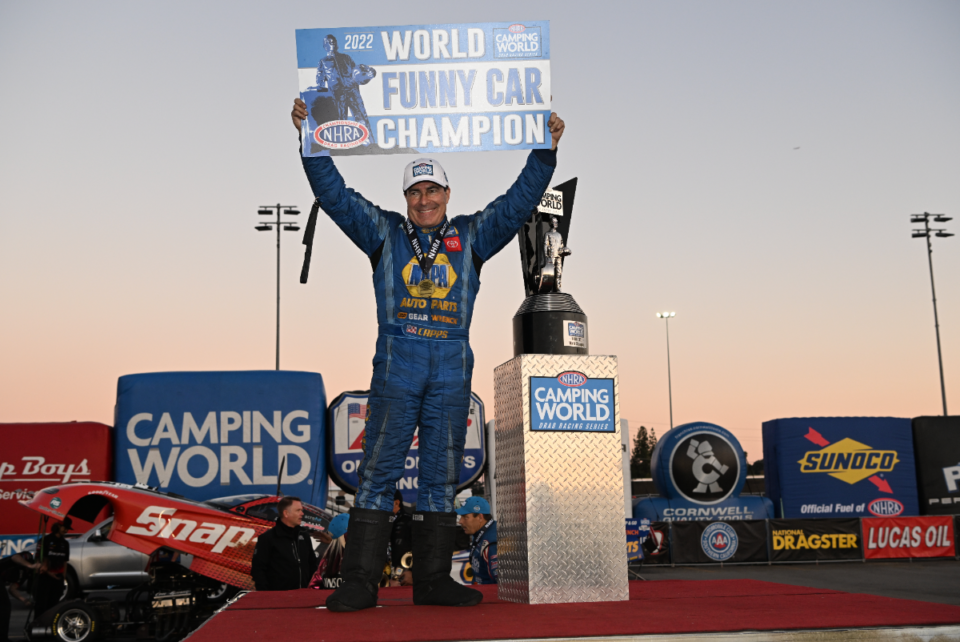 In a dramatic final round to close out the 2022 season, defending NHRA Funny Car world champion Ron Capps clinched his third series title, and the first for Ron Capps Motorsports, on Sunday at the NHRA Finals at Auto Club Raceway at Pomona. Capps drove the NAPA AUTO PARTS Toyota GR Supra to a runner-up finish to win his second consecutive championship crown, becoming the first Funny Car driver to win back-to-back championships in 20 years.

Starting the weekend ranked second in the point standings behind Robert Hight, Capps overcame a 61-point deficit to lock up the 2022 NHRA Camping World Series Funny Car title. The Southern California native qualified No. 1 with a 3.837-second blast at 337.33-mph, collecting six bonus points along the way in qualifying. Those bonus points moved Capps to just under two rounds behind Hight going into eliminations.

Capps defeated Jeff Arend and Tim Wilkerson in the first two rounds of eliminations. When Hight lost to Bob Tasca III in the second round, the door was open for Capps to take the title. Capps then won his semifinal match with Tasca, passing Hight for the points lead. Capps secured the championship when he made a clean pass in the final, losing with a 3.85-second pass at 333.16 mph to Cruz Pedregon’s 3.839-second effort.

Capps started the 2022 season as a team owner, forming Ron Capps Motorsports after winning the 2021 championship with longtime team owner Don Schumacher and Don Schumacher Racing. Even with the added challenges that come with the owner/operator role, Capps was able to come out on top yet again.

“Anything you put your mind to you can do with great people around you,” said Capps, who’s just the seventh Funny Car driver to win as many as three titles. “I can’t even begin to say what it feels like right now. This is for the NAPA AutoCare people, all the NAPA AutoCare owners – 6,000 strong – and for everybody at home that puts on a Ron Capps and NAPA jersey watching on the couch on Fox Sports; Gearwrench; and of course, Toyota coming on board. But my family more than anything, we have taken on a role this year that’s been unbelievable. I’m sure you’ve seen me age quite a bit in the last year or so.”

Capps and the NAPA team wasted no time putting together an impressive championship defense campaign as they made a run for the 2022 title. Continuing under the tuning guidance of crew chiefs Dean ‘Guido’ Antonelli and John Medlen, the newly formed Ron Capps Motorsports…