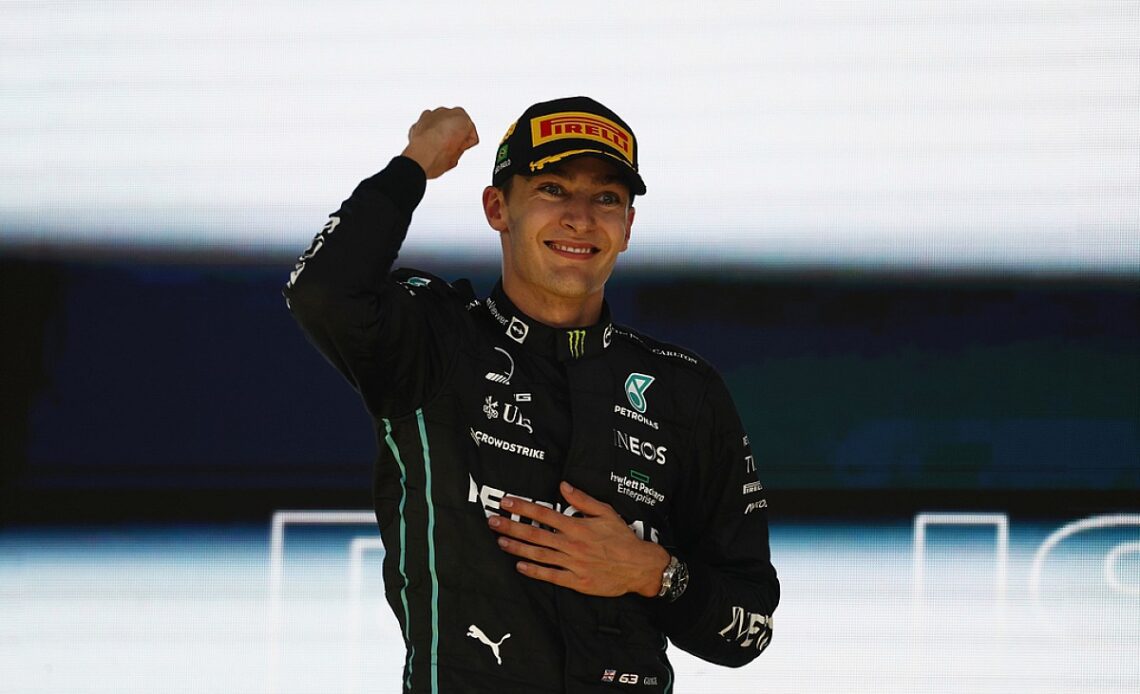 Polesitter Russell powered clear at two safety restarts to avoid a battle with his teammate, who he was free to race, as Hamilton recovered from his fall to eighth after tagging with 2021 rival Verstappen in what was an action-packed penultimate round of the campaign at Interlagos.

With Red Bull’s day getting worse when Sergio Perez was stuck on the wrong tyre for the final stint, Ferrari could capitalise to take third and fourth – Carlos Sainz heading Charles Leclerc despite the Monegasque arguing for team orders to secure second in the championship.

Similarly, despite instructions to do so, Verstappen did not hand back position to Perez on the final lap to head a Red Bull 6-7.

At the start, the Mercedes launched strongly to hold the lead as both Red Bulls came under considerable threat from Lando Norris, who launched past medium-tyre starter Charles Leclerc for fifth.

Sergio Perez ultimately had the McLaren covered as Russell ran well clear of his teammate, who in turn had plenty of breathing space over Verstappen before a first-lap safety car.

Sensational qualifying topper Kevin Magnussen, who had fallen to eighth in the sprint race, appeared slow off Turn 7 and was nicked in the right-rear by the chasing Daniel Ricciardo.

That pitched his Haas machine into a spin and as Magnussen rolled back, he thumped into the Australian – who is without a front-line drive for 2023 – to pitch him into the tyre barriers.

After the protracted clean-up, green flags returned at the end of lap six of 71 but Russell held the restart until he was level with the pit entry and then floored it clear of his teammate.

The Red Bulls reacted well to give Verstappen an opportunity to take second on the outside of Turn 1 but as the track snaked right, he made contact with bitter 2021 title rival Hamilton.

Both took to the run-off. Verstappen came off worse with front wing damage and pitted for mediums, while Hamilton stayed out but suspected floor damage as he dropped to eighth.

The stewards deemed Verstappen to be more at fault and awarded him a five-second penalty.

Then Leclerc was in the wars when, attempting to pass Norris through Turn 7, the McLaren MCL36 understeered into the side of the Ferrari to send it spinning into the outside barrier.

Leclerc was able to resume to prevent a second swift safety car and stopped for mediums, while the stewards also handed Norris a five-second penalty in a much less debatable call.

All this drama left Russell to…