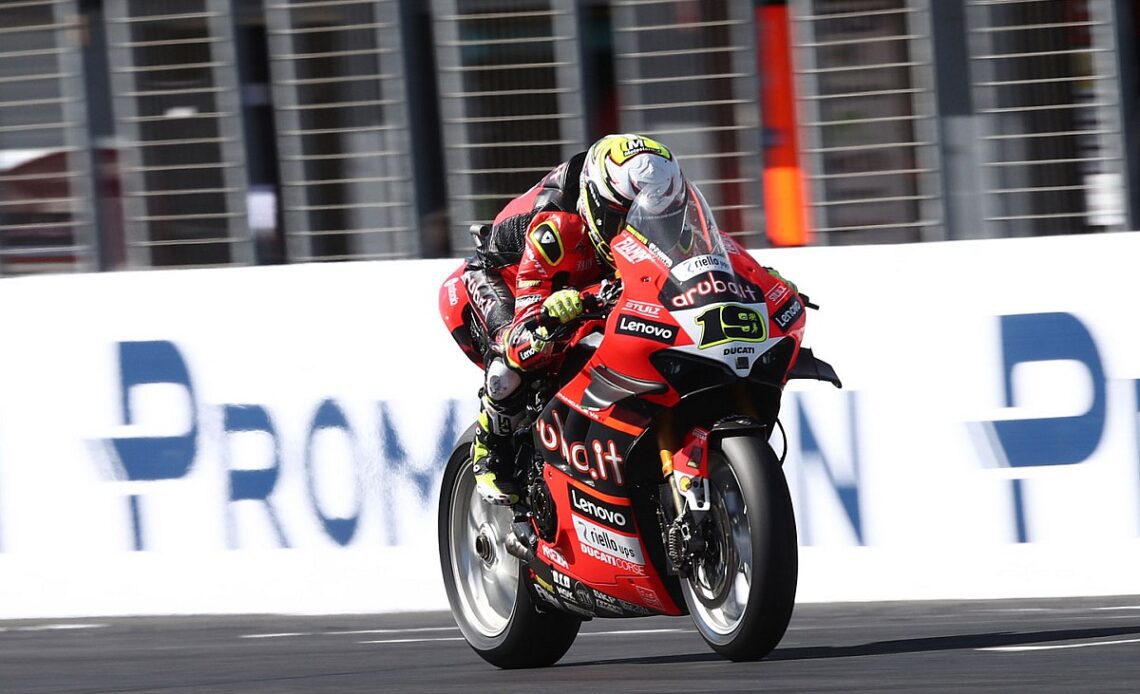 Ducati rider Bautista was the only rider in the field to risk starting on slicks for the 10-lap sprint, but the decision paid dividends as he was able to slice his way from 16th to a comfortable 15th win of his title-winning season.

Second place for Toprak Razgatlioglu has cemented his status as runner-up in the standings ahead of Jonathan Rea.

While poleman Bautista sunk down the order on the opening lap on what was a still partly-wet track following a pre-race downpour, Yamaha man Razgatlioglu surged into an early lead, with the Kawasakis of Rea and Alex Lowes joining him at the front to make it a three-way battle.

Both Razgatlioglu and Rea had chosen a wet front tyre and intermediate rear, while Lowes had gone with intermediates all round.

Initially it was Lowes who appeared to have made the better choice as he passed Razgatlioglu to lead on the second lap, but by the fifth lap Rea was back at the front, with Lowes slipping to third behind Razgatlioglu.

By this point, Bautista was already back inside the top 10 and set the fastest lap as the track continued to dry out, and it appeared only a matter of time before the Spaniard would join the leading group.

Lapping two seconds faster than the leaders, Bautista was back up to fifth by lap seven, as Razgatlioglu repassed Rea for the lead.

Next time by, Bautista made short work of both Andrea Locatelli and Lowes to climb to third, and at the start of the penultimate lap he made his move for second on Rea at the Southern Loop.

Razgatlioglu managed to cling to the lead for a few more corners, but the inevitable move came at Lukey Heights, with Bautista going on to win the Superpole race for only the third time in 2022.

Rea had no answer to Razgatlioglu in the closing stages, locking the six-time champion into his lowest position in the riders’ standings since 2014, while Lowes fell short of the podium in fourth place.

Locatelli resisted a late charge from BMW rider Scott Redding to finish fifth, with Garrett Gerloff again finishing as the best of the independent riders in seventh aboard his GRT Yamaha.

A small number of riders pitted to change tyres during the race, but the shorter race length offered little time to catch up for those that opted for such a strategy.

That meant both Michael van der Mark (BMW), who briefly ran in the top three on the opening lap, and the second Ducati of Michael Ruben…