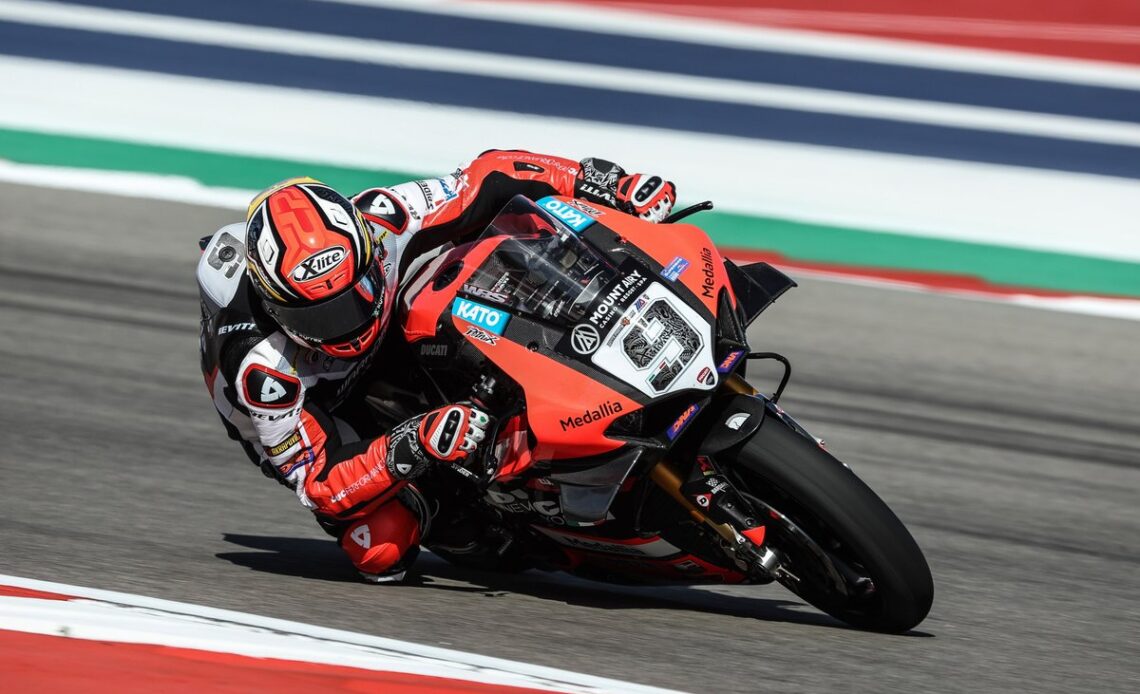 Petrucci had long been rumoured to make the switch to the production-based series next year after reuniting with Ducati in MotoAmerica, where he finished second in the championship this year.

Ducati’s decision to renew the contract of Michael Ruben Rinaldi at the factory team in September appeared to have closed the door for a WSBK move, but Petrucci has now managed to secure a berth with the Barni Racing Team that runs the same Ducati Panigale V4 R.

The Italian rider has a past relationship with Barni, having finished second in the Superstock 1000 class with the squad in 2011 during his last tenure in the WSBK paddock.

In fact, it was his results with Barni that helped him land a seat in MotoGP in 2012.

“I’m really pleased to be back with Barni. 2011 was one of my best ever seasons but, more importantly, I couldn’t say no to the chance to race in World Superbike with such a competitive bike,” said Petrucci.

“It’s a Championship in which I’ve never competed in, and I can’t wait to measure up against the competition. I want to thank the entire Barni team for giving me this opportunity and everybody that has contributed to making this agreement possible.”

Petrucci spent the majority of his premier class career with Ducati, including two seasons with the works team, scoring a memorable maiden victory at Mugello in 2019 before adding another race win to his tally at Le Mans the following year.

Following his split with Ducati after 2020, Petrucci moved over to rival European brand KTM, but results proved to be below expectations and 2021 turned out to be his last year in MotoGP – although he did make a surprise appearance for Suzuki in Thailand last month.

He was due to focus on cross-country rallies this year and made an impressive debut in the Dakar Rally, clocking a stage win, but ended up changing his plans and renewing his ties with Ducati to race in MotoAmerica instead.

The 32-year-old came close to winning the championship on his first attempt, losing out to Yamaha’s Jake Gane by 20 points.

His appointment is expected to boost the results of the Barni team, which recently had recruit Xavi Fores to replace Luca Bernardi for the final three rounds of the 2022 WSBK season.

“As always, we will do our best to provide the rider with…