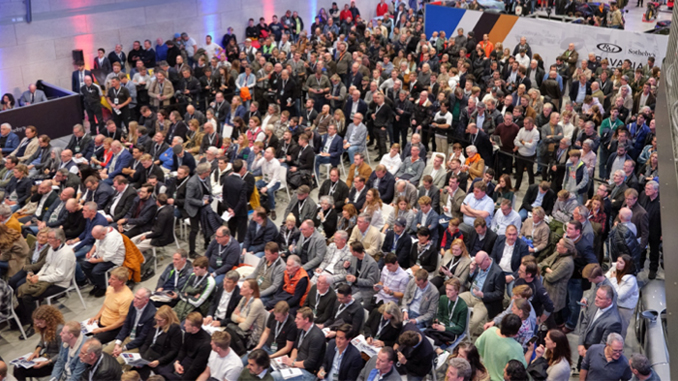 MUNICH, GERMANY – November 28, 2022 – (Motor Sports NewsWire) – RM Sotheby’s arrived at Motorworld in the heart of Munich for the first time and left having achieved a truly remarkable sale in which multiple world record prices were achieved. The sale has closed off the European auction calendar in impressive style as it totalled €23,500,610 and achieved an impressive 90.5% sell-through. The auction is only the second sale RM Sotheby’s has conducted in Germany and has become the highest-grossing collector car auction to ever take place in the country. The event took place in a truly packed auction room with bidders representing 44 countries. The sale was notable for including the remarkable Bavarian Legends Collection, offered entirely without reserve and featuring some of the greatest models ever built by BMW, spanning from the pre-war period all the way through to the 21st century.

Six lots exceeded €1,000,000, topped by a 1991 Ferrari F40, a lovely and well-maintained example of what remains one of Maranello’s hottest properties. Retaining matching-numbers body, chassis, engine, and gearbox, and with only 9,400 recorded kilometres, it brought €2,311,250. Many eyes were on the 1938 Mercedes-Benz 540 K Special Roadster in the style of Sindelfingen, which sports a stunning recreation of the special roadster body on a factory 540 K Cabriolet B chassis which retains its matching-numbers engine. This stunning car deserved its €2,007,500 selling price, exceeding its high estimate. From within the Bavarian Legends Collection, the 1958 BMW 507 Roadster Series II achieved an excellent €1,917,500 and is one of just 252 built. A sought-after Series II car, it has a matching-numbers chassis and engine. The 2008 Lamborghini Reventón, one of only 20 examples produced, had a mere 106 kilometres on the clock and sold for €1,748,750. Rounding off the five top sellers of the sale was the 2017 Ferrari F12tdf, part of the stunning Driver and Rider Collection, which sold for €1,208,750.

The truly outstanding collection of 32 cars and motorbikes was largely made up of rare and low-mileage BMWs from across seven decades of the marque’s history and was offered entirely without reserve. The collection delivered some of the most remarkable auction results seen in 2022, with a number of cars selling for…