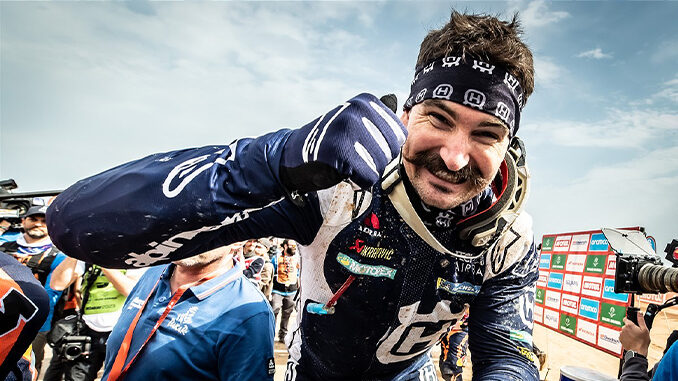 MATTIGHOFEN, AUSTRIA – January 15, 2023 – (Motor Sports NewsWire) – Husqvarna Factory Racing’s Skyler Howes has battled through 14 stages of intense racing to finish the 2023 Dakar Rally in an excellent third place. In what has been a career-best ride for the American, Skyler led the race for a total of six stages and stayed in the hunt for victory right through to the very final timed special.

Coming into today’s 14th and final stage, Howes trailed the leader by just one minute and 31 seconds – an incredibly narrow margin after well over 43 hours of racing. As the third-to-last competitor to set off into the special, Skyler had a comfortable advantage over the fourth-placed rider and knew, with the two front runners fighting it out behind him, a smooth, calculated ride to the finish was all that was needed to secure his podium result.

Completing the final stage as fifth fastest, Howes was overjoyed with his overall result of third place on what is his fifth Dakar Rally appearance. In just a few years, the 30-year-old has gone from promising privateer to top-three Dakar racer. His podium at this year’s event added to his excellent 2022 season results bode well for Howes as he now looks ahead to the rest of the FIM World Rally-Raid Championship season.

With three stage wins at this year’s event – the most of any rider at this year’s race – Luciano Benavides enjoyed a highly positive, and highly rewarding time at the Dakar. By combining his skill in opening specials with precise navigation and the ability to ride largely error-free throughout the 14-day event, the Argentine was rewarded with sixth overall to equal his career-best result from 2020.

Skyler Howes: “I am so happy! It’s been an incredible race with highs and lows, and it’s come right down to the wire on this final day. I knew the guys behind me would be pushing so hard today, and to go into this final day less than two minutes behind after well over 40 hours of racing is incredible. I arrived at the finish safely, and it feels like a dream come true and such an honour to share it with two legends like Toby (Price) and Kevin (Benavides). Everyone knows what you have to go through to get to this point, and after all that hard work, it makes this moment feel so sweet. Of course I want to come back and see what the other two steps of the podium feel like. But to now be one of…