Why Vowles is a ‘very good’ fit at Williams 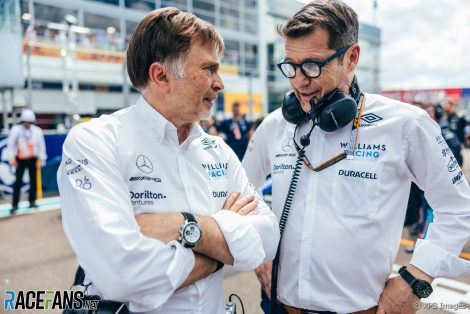 Vowles started his F1 career as an engineer at British American Racing, which became Honda in 2006. By the time the team became Brawn he had stepped up to the role of race strategist, and helped guide Jenson Button to the world championship that year.

The following year the team became Mercedes, which went on to dominate the V6 hybrid turbo era. Vowles and his strategy squad took Lewis Hamilton to six drivers’ title, Nico Rosberg to one, and the team to an unprecedented eight consecutive constructors championship wins.

Following Capito’s exit, Williams owners Dorilton Capital moved quickly to appoint a replacement. Vowles admitted he only told Mercedes boss Toto Wolff “into the new year” that he was contemplating a change, yet it wasn’t the first time he had considered moving up from the strategy department into team management.

“I think this journey towards team principal has been one that’s been in my head for many years, and Toto and Mercedes have been incredibly kind to provide me a pathway to get there,” Vowles explained. “A number of responsibilities have come my way over the last few years.

“I’m fortunate enough to have an incredibly strong strategy team, a strategy team that really over the last few years, I’ve simply been the front face for. But they’ve been doing the hard work behind the scenes and they deserve an opportunity to headline it in many regards.”

Vowles had already begun his transition beyond his realm of race strategy. “That’s what happened this year,” he continued. “We handed the reins over to them and they did an exceptional job, including the win in Brazil.”

He joins Williams after another tough year for the team, which finished 10th and last in the constructors’ championship. Having finished eighth the year before their points tally fell by more than half in 2022. Yet their history is rich with success – only Ferrari have more constructors championship wins – and Vowles felt joining them was an “incredible opportunity” he could not pass up.

“I’ve been chatting to Williams over the last month or so,” he explained Vowles….