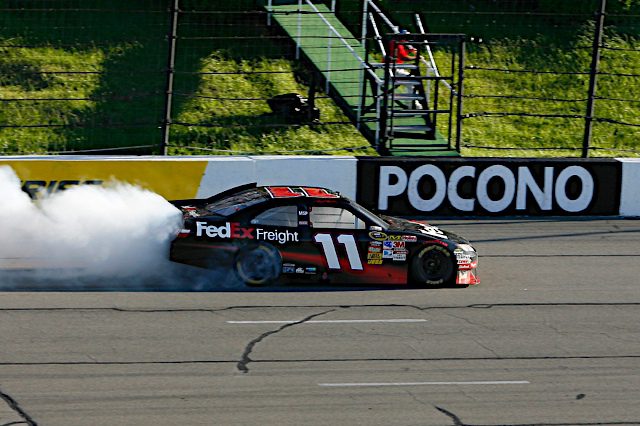 Remember that bizarre NASCAR doubleheader — er, quadruple-header — at Pocono Raceway way back in 2020?

After COVID-19 shut everything down in March of that year, NASCAR finally returned in May and a little over a month later came a four-race weekend at Pennsylvania’s Tricky Triangle.

The NASCAR Cup Series’ doubleheader began with a Saturday race with a typical 3:30 p.m. ET green flag, but Sunday kicked off with a 9:30 a.m. NASCAR Camping World Truck Series green flag, the NASCAR Xfinity Series rolling off a few hours later and Cup that afternoon. Both Cup races ran their full distances, despite the Sunday event featuring an early delay for lightning in the area.

Kevin Harvick and Denny Hamlin emerged the winners of the first and second premier series events, respectively, and continued a trend of constant and, to be frank, fascinatingly cyclical contenders at the three-turn oddity.

With the sole 2022 Cup event at Pocono ahead of us this weekend on Sunday, July 24, plus the Xfinity and Truck series (the latter the regular-season finale for its division), it’s a stacked weekend for NASCAR all the way around, and look for the usual suspects to be out front this weekend.

There’s an odd, cyclical nature to some of these drivers’ Pocono wins. After Bobby Labonte swept in 1999, things got a little all over the place: Jeremy Mayfield, Rusty Wallace, Ricky Rudd, Labonte, Dale Jarrett, Bill Elliott, Tony Stewart and Ryan Newman made up the next four years’ worth of winners.

Jimmie Johnson swept in 2004 and didn’t win again at Pocono until nearly 10 years later in 2013, while eventual Hendrick Motorsports teammate Dale Earnhardt Jr. had some solid runs and near-wins at the track in the first 14 years of his Cup career; it took a while, but Earnhardt made it to victory lane there in 2014, sweeping the season.

Kurt Busch won in 2005 and 2007 but didn’t win again until 2016. Hamlin, despite his six wins there, didn’t win for a few years after his sweep, and then after his 2010 triumph it took a decade before the No. 11 rolled into victory lane again at Pocono.

After his 2003 victory, it took Stewart until 2009 for his second and only other triangular triumph, while Carl Edwards’ 2005 win was a precursor to a second for the then-No. 99 driver … but more than three years later. Jeff Gordon had three wins, but the gap between the first and second stretched for four seasons. Eventual HMS stablemate Kasey Kahne had to wait five years…