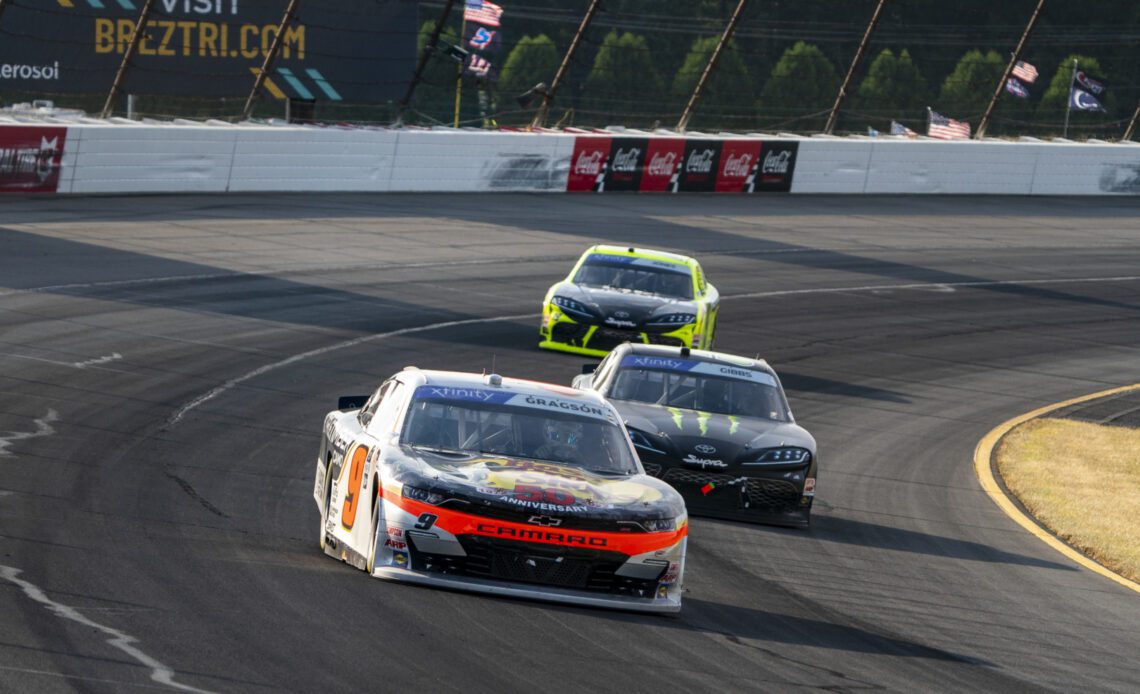 Two of the most determined, talented, young drivers in NASCAR put on a show for the ages in the closing laps of Saturday’s Explore the Pocono Mountains 225 at Pocono (Pa.) Raceway with 24-year-old Noah Gragson ultimately holding off Ty Gibbs, 19, by the blink of an eye to take the victory.

Gragson’s No. 9 JR Motorsports Chevrolet crossed the finish line at the storied 2.5-mile track by a mere .281-seconds ahead of Gibb’s No. 54 Joe Gibbs Racing Toyota – the last 15 laps the duo staying within .3-seconds of one another.

Gibbs earned three of his four race wins this season on a last lap pass, but Gragson didn’t allow it Saturday – so happy with the effort he climbed out of his car and joined his team scaling the fencing in front of a boisterous and approving crowded frontstretch grandstand.

“That was probably the best I’ve ever driven there,” said the Las Vegas native Gragson, whose three wins this season already ties his single season high mark. “I’m worn out. Working my ass off out there to keep the 54 back. He’s pretty fast.

“I had to work for it,” Gragson said still catching his breath from climbing the fence. “It was tough. Kept getting tight, tight, tight and with 15 to go I didn’t think I could hold him off. But we just keep digging.”

That summed up a dramatic ending to an action-packed day.

Gragson’s JR Motorsports teammate Justin Allgaier started from pole position and led the first 23 laps to win Stage 1. Gragson was seventh and Gibbs’ fourth in the opening run. But Gragson took the lead on the ensuing pit stop and won Stage 2 – his seventh and the JR Motorsports series’ best 21st stage win of the year.

Ultimately, good pit strategy made the difference for Gragson, whose Chevrolet was able to benefit from a four-tire and gas stop with 38 laps to go. He re-started sixth – behind Gibbs’ who did not take tires – and worked his way forward, taking the lead for good with 22 laps to go.

“It definitely hurt us giving him a tire advantage,” Gibbs said. “But I was so surprised to be able to hang with the 9 (car) when he was on [fresh tires]. Had a great car, just didn’t put it together. I just made some mistakes and we’ll come back next weekend.”