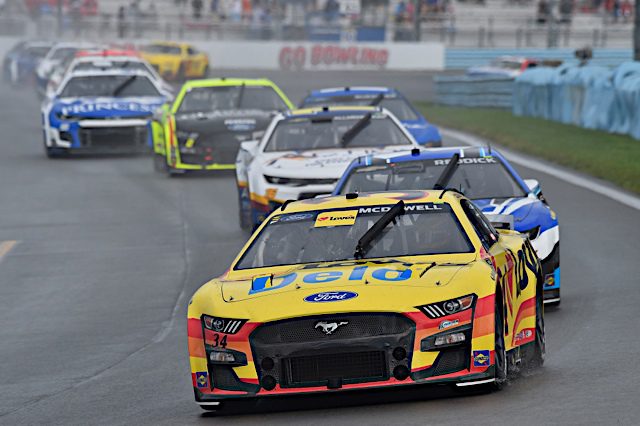 Watkins Glen International is the longest-tenured road course on the NASCAR Cup Series calendar, having had a date on the schedule every year since 1986 (the track was scheduled to have one in 2020, but the race was cancelled due to COVID-19 restrictions and NASCAR refusing to institute COVID-19 testing). This doesn’t even include the three pre-modern era races held on an older version of the track.

Sunday was a very different affair, as rain intruded on the pomp and circumstance. With rain tires, this wouldn’t have been so bad. However, it was accompanied by lightning. Hence, the race started 100 minutes late at 5 p.m. ET.

For the past couple of years, NBC Sports has used an alternate format for broadcasting this race. In the past, it has been referred to as “MVP” coverage, short for “Multiple Vantage Point” coverage. Now, it is known as “radio-style” coverage.

Whatever NBC Sports wants to call it, the result is the same. Rick Allen and Steve Letarte held down the fort in the broadcast booth, while Dale Earnhardt Jr. and Jeff Burton were dispatched around the track. Also, Alex Hayden was back with the broadcast from MRN Radio.

The result of a radio-style broadcast is two-fold. One, you’re going to have a more frantic style of commentary. This can be for a number of reasons. The easiest of those reasons being that it’s quite loud.

Burton, Earnhardt Jr. and Hayden were broadcasting outdoors on Sunday. NASCAR Cup Series cars are loud, and they were really close to the track (Hayden in the Esses, especially). It’s hard to make yourself heard. From what I saw on Twitter, that fact may have rankled some viewers. However, that is something that comes with the game. It is NASCAR, after all. Noise is part of the experience.

Now, the three remote broadcasters didn’t really have a chance to move around during the race Sunday. They were more or less tethered to their towers. I wouldn’t have expected them to move anywhere during the race. Back in the early 1990s, it wasn’t uncommon for Benny Parsons to move around while reporting. In 1990, he “got tired” of the view in turn 1 and wandered up the frontstretch to what is now turn 11 for another vantage point. Right around the time he got he got there, Hut Stricklin and Sarel van der Merwe crashed right in front of him.

Being in position, Parsons was able to go and get quotes from van der Merwe and Stricklin. Obviously,…