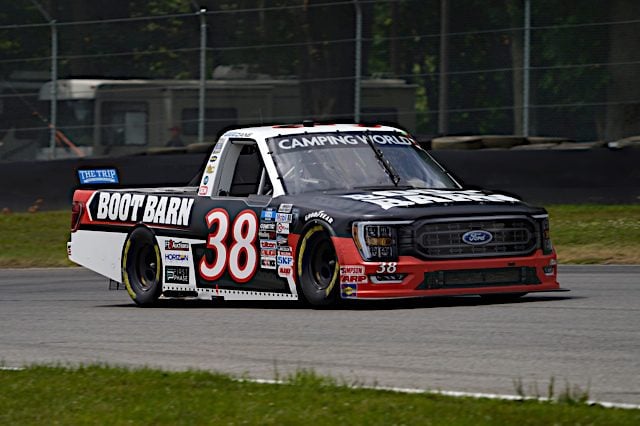 Boot Barn is back with Front Row Motorsports in both the NASCAR Cup and Craftsman Truck series in 2023, FRM announced Jan. 24.

The company will sponsor Todd Gilliland‘s No. 38 in the Cup Series for four races plus one exhibition appearance, starting at the All-Star Race at North Wilkesboro Speedway and followed by events at Charlotte Motor Speedway, Daytona International Speedway, Kansas Speedway and Phoenix Raceway.

“We are fortunate to have such a great partnership with Boot Barn because they really engage with the fans and our team,” Gilliland said in a team release. “I am just a huge fan of everyone behind Boot Barn and how great the cars always look. Hopefully, we can deliver impressive results in 2023 with Boot Barn on the sides and hood this season.”

“Boot Barn was a huge part of our success last season,” Smith added. “We never finished outside the top three when we raced with their scheme. This year, I want to put Boot Barn in victory lane. I also love what they are doing with our race shop and getting more fans involved, too. That’s pretty cool.”

Gilliland enters his sophomore Cup season having scored one top five and two top 10s in 2022, while Smith is the defending Truck champion.